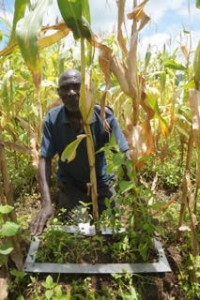 Weed management is arguably one of the largest factors limiting grain yield across the southern Africa (Parker, 2012). Smallholder farmers typically have limited access to herbicides, labor, and specialized tilling implements, particularly during critical weeding periods. One of the most critical times for smallholders to weed their intensified grain cropping systems is three to four weeks after sowing. Unfortunately, this period coincides with the time when food and finances for the year have often dwindled. Available household labor at that time tends to be allocated for off-farm employment to supplement household necessities.

Smallholders employ numerous weed control measures.  They include preventative practices, such as tilling or banking, and treatment practices such as manual pulling. These methods, however, are minimally successful when human capital is limited, creating difficulties to effectively manage weeds.  Herbicides were promoted to smallholders during the Green Revolution but their success was limited due to poor input availability and affordability (Wolf et al., 1986).  Following the millennia, more environmentally sound farming practices, such as conservation agriculture, were promoted.  Such methods required the harvesting and application of ample amounts of crop residues and more frequent weeding through out the season. Many farmers abandoned these practices after obtaining marginal yields (Baudron et al., 2012; Nyagumbo, 1999).

The proliferation of weeds is largely dictated by temperature, light, and water. These climatic factors have drawn increasing attention to pest management since the millennia (Dukes & Mooney, 1999) because climate change will likely compound smallholders’ struggles. Crop losses due to competition with weeds in the sub/tropics is expected to increase because temperature and humidity are expected to augment weed proliferation, particularly that of grassy weeds (Ronsenzweig et al., 2001).