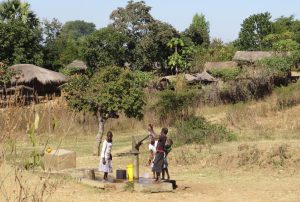 A poverty trap describes a situation where populations encounter mechanisms that reinforce a cycle of poverty. Below we explore a few of the poverty traps facing Malawian smallholders, those cultivating less than two hectares, including: the role of seasonality and ganyu (or informal) labor, impediments to agricultural technology adoption, inability to afford agricultural inputs, risk aversion, climatic change, and illness (Conroy et al., 2006).

Seasonality frequently dictates how and when smallholders can allocate land, labor, and finances to their agricultural practices (Austin, 2008). In Malawi, ganyu labor, or informal piecemeal labor, is a common strategy for vulnerable smallholder farmers to earn cash or food during the growing season while they are waiting for their own harvest. Seasonal agricultural labor requirements generally peak at the same time the previous season’s food stocks are lowest. Thus many smallholders go to work for better-resourced farmers in order to supplement their own food stocks (Barrett et al. 2001). As a result, the most vulnerable farmers may neglect working on their own farms at a critical period for maintaining or enhancing productivity, resulting in a downward spiral for food production.

The inability to adopt agricultural technologies represents another potential poverty trap. Without sufficient labor, finances, or capital, many smallholders are unable to adopt seemingly accessible agricultural technologies. For example, synthetic fertilizer and/or the application of nitrogen-rich biomass is generally linked to increased crop productivity. For poor smallholders, however, application of adequate chemical fertilizer is generally too expensive and the application of a sufficient amount of biomass (~3tons/ha of crop residue) to improve productivity is often unfeasible (Andersson & Giller, 2012). In Malawi, farmers that previously relied on subsidized fertilizer and hybrid maize to improve yields frequently switch to growing local varieties, yielding lower than 1 ton/ha of grain, when subsidies are removed (Thangata & Alavalapati, 2003). Furthermore, even if inexpensive fertilizer is available, continuous cultivation of maize as a monoculture has degraded some soils to the point where they are unresponsive to chemical inputs, exacerbating poverty traps (Tittonnell & Giller) (learn more about Soil Quality, Soil Fertility, and Low Productivity).

Additionally, smallholders are often risk averse, generally considered a symptom of their financial and food insecurity (Ajayi, Franzel, Kuntashula, & Kwesiga, 2003). When poor farmers have little certainty about a technology’s benefits or its overall reduction to risk, many have no option but to remain with subsistence practices, keeping them bound to poverty (Rusinamhodzi, Corbeels, Nyamangara & Giller, 2012). For instance, smallholders in southern Africa generally reserve the majority of their fertile land for staple crops (e.g. maize) in an effort to secure their annual staple food crop requirements. Crops that can improve soil quality, such as legumes, are planted later and often only on 10% of the land (Thierfelder, Cheesman, & Rusinamhodz, 2013). Without crop rotation, due to small landholdings, poor integration of crops or technologies that can ameliorate smallholder soil quality often result in decreasing yields over time, which is ultimately a tradeoff resulting from efforts to obtain short-term food security.

Climate change represents yet another concerning poverty trap. In developing countries where agriculture is the primary livelihood, climatic shocks have the greatest affect on farmers with little infrastructure (e.g., irrigation) to soften their impact (Snapp et al. 2010). Subsequently, resource-poor African households may sell what limited productive assets they have to recover (Conroy et al., 2016). Finally, the vicious cycle of poverty can intensify when crops fail and households become chronically ill from hunger and an inability to purchase medicine. Households then often turn to income generating activities that deplete their dwindling resources, including selling their own labor, wood, or charcoal.