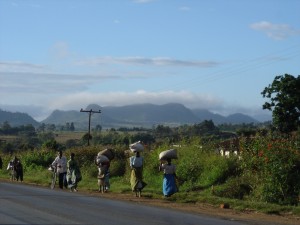 More than half of global population growth between now and 2050 is expected to occur in Africa. Africa has the highest rate of population growth among major areas, growing at a pace of 2.55 percent annually in 2010-2015. More than half of the additional 2.4 billion people projected to be added to the global population between 2015 and 2050 will be added in Africa. As a result, Africa’s share of the global population is projected to grow to 25 percent in 2050, and to 39 percent by 2100. A rapid population increase in Africa is expected even if there is a substantial reduction of fertility levels in the near future, primarily because populations in most regions are quite young. Children under age 15 account for 41 percent of the continent’s population in 2015 and young adults aged 15 to 24 account for an additional 19 percent.