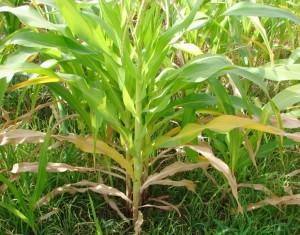 Close up of N deficiency in maize plant.

Nitrogen (N) is the nutrient that most frequently limits terrestrial plant growth, which includes agricultural production, and consequentially is typically supplemented in agricultural systems through inorganic or organic fertilizer application. N has been identified as a grand challenge in agriculture, especially in Sub Saharan Africa where fertilizer production is limited and fertilizer prices are substantially higher than in northern industrialized countries. Additionally, maize (Zea mays) is the dominant crop throughout much of eastern and southern Africa, in part due to its high productivity, but maize also has high N requirements. Nitrogen Agronomic Efficiency (NAE) can be defined as the amount of additional grain harvested per kilogram of nitrogen applied to a grain crop, and this drives both the agronomic and economic efficiency of fertilizer use. In Sub Saharan Africa, and Malawi in particular, NAE is generally two or three-fold higher on experimental research plots than on smallholder farmer fields, indicating a need to better understand and address the factors driving the NAE gap (Snapp et. al, 2014).

In Malawi, NAE from researcher-mediated experiments are typically 20 to 65 kg of grain per kg of N fertilizer applied, compared to NAE rates on farmer fields of 5 to 15 kg of grain per kg N fertilizer applied (Table 1). On-farm yields are estimated by crop cuts carried out on farmer fields, or based on farmer recall of crop yields and fertilizer applied from household surveys. Detailed farmer plot management information, systematically carried out over time and linked to crop cut and soil characterization data is one of the unique aspects of our learning lab, which over time is developing into a detailed panel data set for Central Malawi (Mungai et al., 2016). This is at a scale that provides complementary insights to the nationally representative agricultural panel data sets for Malawi such as the IHHS and LSMS, which are available through the World Bank (http://microdata.worldbank.org/index.php/catalog/lsms). 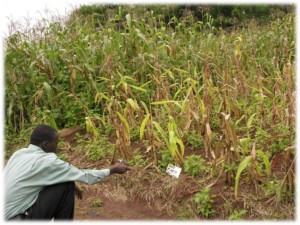 Our findings highlight the magnitude of disparity in researcher and farmer managed NAE, and the urgent need to understand and improve NAE under smallholder farm conditions. Remote sensing data trends provide independent verification that agricultural lands productivity is stagnant or in decline across much of Malawi, and in particular, maize yields are not on the upswing, in contrast to statistical reporting. This is evidence of problematic NAE, as maize productivity has not increased in spite of the major financial investments by the Malawi government in fertilizer subsidies (Messina et al., 2017). Explanations for the high NAE gap in Malawi include: 1) inadequate weeding, often due to labor constraints see <Poverty Traps>), 2) continuous maize cropping at the expense of land fallowing or rotations, 3) late delivery and application of fertilizer, 4) low soil organic matter and soil quality (see <Soil Quality, Soil Fertility, and Low Productivity>, 5) soil chemical properties, and, 6) non-random sampling methods and/or reliability of survey recall data. However, NAE was also found to be highly variable within concentrated geographical regions with similar growing and climatic conditions suggesting the importance of management skills and soil conditions (Snapp et al., 2014). Additionally, optimal fertilizer application timing is key to NAE and fertilizers in Malawi are frequently delivered late. Richer-Gilbert and Jayne (2012) found a positive relationship between access to credit, asset wealth, and NAE indicating that wealthier farmers receive greater yield benefits from inorganic fertilizers.

Ricker-Gilbert, J., and T.S. Jayne. 2012. Do fertilizer subsidies boost staple crop production and reduce poverty across the distribution of smallholders in Africa? Quantile regression from Malawi. Selected Paper for the Triennial Meeting of the International Association of Agricultural Economists. Foz Do Iguacu, Brazil, 18-24 August 2012.