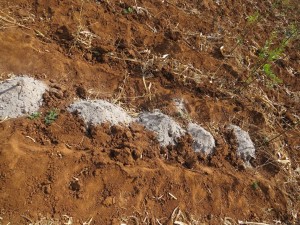 Agricultural productivity in sub-Saharan Africa is constrained by lack of access to inputs and services, as well as to transport, markets and other social infrastructure. Investment in the sector is needed to stimulate the cultivation and commercialization of agriculture. Chemical fertilizer usage is much lower in sub-Saharan Africa than elsewhere. High transaction costs make inputs expensive for smallholder farmers, which is part of the reason for the very low rates of input use and ultimately the low agricultural yields in the region. Usage of inorganic inputs is generally hindered further by poor infrastructure, including roads, markets, and communication systems.

Development of dynamic commercial markets for agricultural inputs is vital for productivity growth, and large commercial input enterprises have been slow to emerge in sub-Saharan Africa. Most farmers likewise have limited access to organic inputs relative to the size of land they cultivate. Animal manure is often applied only close to where animals are kept due to the difficulty of transporting it and the generally limited supply. Composting of organic material can be accomplished on a small scale, especially for high value crops where the labor investment may be justified by higher returns. In many places overall biomass availability is limited as crop residues and wild grasses are also used as a livestock feed, cooking fuel source and building material for roofs and fences. Furthermore, farmers may not be able to keep their crop residues on their fields because most land becomes an open-access communal area once harvests are in and much of the grass and residues are consumed by livestock or destroyed by uncontrolled fires.